H.J. Martin and Son completed a signature retail project – The Haberdasher Limited in downtown Green Bay – late in 2014. A long-time men’s clothier in the city, The Haberdasher Limited relocated from its prior location on the southern edge of downtown to a previously unfinished space at 335 N. Washington St., across the street from the new global headquarters of Schreiber Foods and a block away from the expanding KI Convention Center.

What made the project unique for H.J. Martin was the company’s involvement from start to finish as the general contractor and construction manager, touching all aspects, including design, engineering and phasing. In those roles, the company also hired and facilitated all sub-contractors, while utilizing four of its own divisions – Walls and Ceilings, Glass and Glazing, Flooring, and Doors and Hardware – to self-perform work.

“We take tremendous pride in this project,” says H.J. Martin CEO Edward Martin. “To be involved in every facet, from beginning to end, demonstrated the full scope of H.J. Martin’s capabilities. I’ve had a number of people comment that The Haberdasher Limited has the look and feel of a retail operation in a big city, like New York or Los Angeles.”

The new owner of The Haberdasher Limited, Daniel Wickman, was clear in his vision for the clothier’s new retail space: he wanted unique, he wanted upscale, and he wanted different than any other clothing retailer in Green Bay.

The 3,700 SF of retail space had been empty since the building was constructed in 2008. H.J. Martin and Son worked closely with Wickman, the architect (Performa Inc. of Green Bay) and the design team (Designs of the Interior of Green Bay) during the conceptualization and design phases.

To avoid low acoustical ceilings of roughly 10 feet in height, custom ceiling clouds and pans were specified. This provided for a more open concept, allowing for a mix of drum lights, chandeliers, canned lights and track lighting above.

“We are thankful that Daniel Wickman trusted H.J. Martin with such a special project in our hometown.”

The retail area has an upscale feel to it 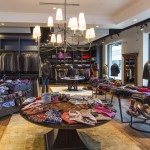 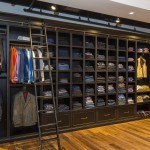 Joseph A. Interiors handled the millwork 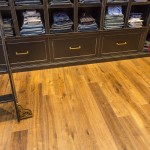 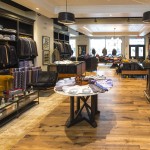 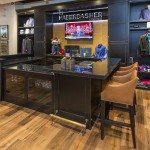 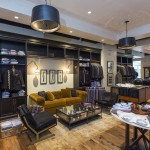 A mix of drum lights and canned lights were utilized 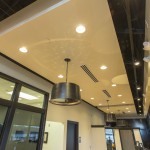 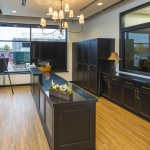 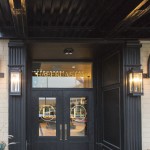 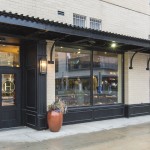 Custom bases of PVC, painted black, were designed by HJM

H.J. Martin self-performed several portions of the project.  Its Walls and Ceilings division handled the steel-stud framing, along with the drywall installation and finishing.  Walls and Ceilings also expertly crafted the custom clouds and pans overhead.

The Glass and Glazing division of H.J. Martin followed to install the storefront windows, the front-entrance doors, mirrors and the interior glazing within the tailor shop.

The flooring consisted of 1,990 SF of Provenza Heirloom engineered hardwood in the retail area, along with 1,540 SF of luxury vinyl tile (Earthwerks Legacy Plank) in the tailor shop.

Joseph A. Interiors of De Pere, Wis., handled all of the millwork, along with interior painting, while Elevate97 in Green Bay provided the interior graphics and signage.

The Haberdasher Limited opened for business on Sept. 2, 2014.