H.J. Martin teams up with community on Backstage at Meyer

H.J. Martin teams up with community on Backstage at Meyer

H.J. Martin and Son recently teamed with Green Bay community leaders to complete a vibrant, new entertainment option in the city’s downtown. Backstage at the Meyer opened its doors in July 2015, providing a dazzling, multi-use space adjacent to the historic Meyer Theatre on the previously blighted corner of Walnut & Washington.

The Innovation and Technology Center of Breakthrough Fuel occupies new, second-floor offices located above Backstage at the Meyer. The transport technology and mobile fuel management company based in Green Bay moved into its space when that part of the project was completed this past April.

H.J. Martin donated to the $4-million project, along with performing multiple aspects of the work. David Martin, a fourth-generation executive of the company, additionally served as a volunteer on the capital campaign.

“The new building is an absolute showpiece,” says Jeff Mirkes, president of the Meyer Theatre board of directors. “Our board recently toured it and was delighted with the finished product. We are very thankful for the participation of H.J. Martin, giving generously as a donor and for the quality of workmanship it provided. The company’s leadership, particularly David Martin, also was important to making this happen.”

Three of H.J. Martin’s six commercial divisions participated in the project: Walls & Ceilings, Flooring and Glass & Glazing. Jay Hussong was the company’s project manager on Backstage at the Meyer.

Click on any photo to view it and to launch a photo gallery. 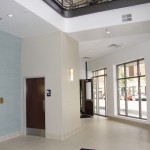 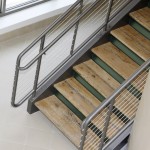 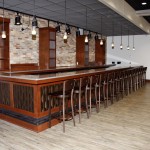 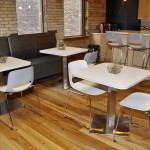 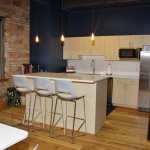 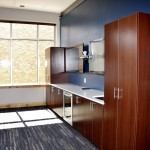 Backstage at the Meyer was conceptualized as a means of providing year-round revenue streams outside of events at the 1,000-seat Meyer Theatre, a Green Bay landmark which opened on Valentine’s Day 1930. Located on the ground floor, with a kitchen it is equipped to handle corporate events as well as private parties, including weddings, for up to 200 people. With a stage, it also can serve as a small performance venue.

The work of H.J. Martin’s Walls & Ceilings team was highlighted by an arched ceiling in the new entryway and a hand-troweled finish. Included in the work of the company’s Glass & Glazing division were brand-new Kawneer entrances, storefronts and curtain wall.

Both Backstage at the Meyer and the upstairs office of Breakthrough Fuel feature an industrial design. Reclaimed brick and wood provide warmth throughout. Housing up to 35 people, the Breakthrough Fuel space includes donations of 470 square yds. of carpet tile in the office area and 150 square ft. of ceramic tile in the restrooms.

“When people walk into Backstage at the Meyer the flooring catches their eye and we have received a lot of positive comments,” Mirkes adds. “The glass also is an important part of the design – we want people to see activities taking place night and day, to see what’s happening.”

Smet Construction Services of Green Bay served as general contractor on the project, which began in August 2014.

An event to formally celebrate completion of Backstage at the Meyer is planned for late in 2015, according to Mirkes.

Read more in the Fall 2015 edition of The Flooring Contractor (pages 16-17), a national industry publication covering the flooring industry: http://digitaladmin.bnpmedia.com/publication/?i=270808.