Green Bay, Wis. – H.J. Martin and Son, a Green Bay-based specialty contractor since 1931, today announced that it has purchased the original Shopko store property from Shopko West Associates. Shopko operated for 57 years at the location, at 216 South Military Avenue in Green Bay, until closing in April 2019. Edward Martin, President and CEO of H.J. Martin and Son, made the announcement.

Adjacent to the site of the headquarters and showroom of H.J. Martin and Son, which the company has been at since 1959, the L-shaped property contains 8.362 acres. The site includes 523 linear feet along the west side of Military Avenue and is bordered to the southwest by 605 linear feet along the GB and W Railroad right-of-way. 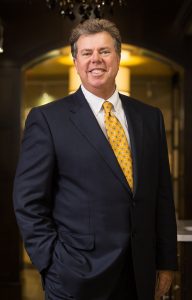 “Military Avenue has been the home of H.J. Martin and Son for 60 years. It is our great pleasure to invest back into an area of Green Bay that we believe in and which has been so good to us,” says Martin.

The Military Avenue Business District was created by the City of Green Bay in 2014 to oversee economic development projects, including business recruitment and retention, on the city’s near west side. H.J. Martin and Son previously worked with it and the city to redevelop the prominent northwest corner of Military Avenue and Mason Street in 2014. A shuttered Cub Foods store was turned into vibrant stores of Michaels arts & crafts and off-price retailer Burlington.