H.J. Martin & Son completed work in September 2014 on a unique, large-scale project that tapped into its workforce might to meet a very aggressive timeline.  The company’s Walls & Ceilings division participated from the outset, while Commercial Flooring was brought in on an impromptu basis to help out an existing tile contractor by finishing the floor and wall tile installation.

The Alliant Energy Center in Madison, Wis., debuted two pavilions at the 2014 World Dairy Expo.  Built at a cost of $24.9 million, the New Holland Pavilions were designed for the comfort and safety of the roughly 2,600 world-class dairy cattle who attend the annual event.  The new multi-purpose buildings cover almost 7 acres and consist of a 90,000-square-foot smaller structure, along with a 200,000-square-foot building.

The H.J. Martin Walls & Ceilings team installed 20,000 lineal feet of metal-stud framing and soffit work, plus more than 160,000 square feet of drywall, within the pair of immense structures.  Also, 900 lineal feet of plenum was utilized to form the duct chase for the massive ventilation systems. 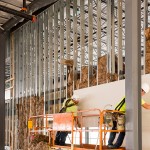 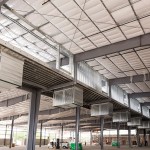 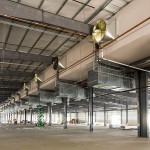 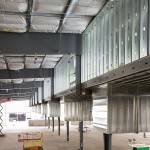 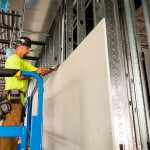 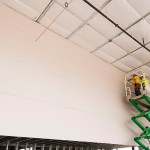 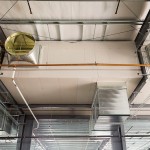 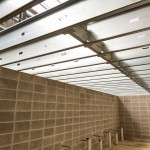 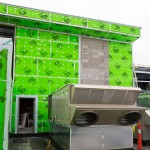 The World Dairy Expo is the largest trade show in the state of Wisconsin, with an estimated economic impact of more than $51 million annually to Madison, Wis., and surrounding Dane County.  The event draws in excess of 70,000 dairy producers and industry personnel, including visitors from 92 countries, and serves as a showcase for elite dairy cattle and emerging technologies within the industry.

A tight timeline was required so that the Alliant Energy Center could accommodate its two largest clients, the Midwest Horse Fair and the World Dairy Expo. In mid-April 2014, 11 old and undersized barns constructed between 40 and 50 years ago were torn down upon conclusion of the horse fair to make room for the new pavilions, using the same footprint.  With the 2014 dairy expo scheduled to open on Sept. 30, the entire project from start to finish had to be completed in five-and-a-half months.

H.J. Martin had its Walls & Ceilings staff on the job site for 20 weeks, starting in May 2014.  The company workforce topped out at a 20-person crew.

Those installers played a significant role in creating a state-of-the-art ventilation system, using 54 intake fans, that drew raves from dairy officials for its ability to keep cattle comfortable.  Walls & Ceilings personnel used structural steel and concrete board to frame the area, as well as specially designing plastic wall panels for the ventilation system.

Within the smaller, climate-controlled Pavilion 1, there was 7,900 square feet of pre-function area for banquets and receptions, along with concession stands, the main lobby and bathrooms.  These areas required structural, cold-formed framing with a large amount of detail – work completed under a fast-track schedule by H.J. Martin.

Similar structural, cold-formed framing was needed for the milking parlor within the larger Pavilion 2.

H.J. Martin also was called upon to complete the floor and wall tile installation due to the accelerated schedule to help out an existing contractor.  Personalized wall tiles, to be permanently displayed in the main entrance corridor of Pavilion 1, required expert craftsmanship from the H.J. Martin installers.  H.J. Martin was able to put six installers on this last-minute project, completing the tile work in a six-week period.

Miron Construction of Neenah, Wis., served as the general contractor on the project.  For H.J. Martin, Craig Nero was the project manager and Al Collar was the on-site supervisor. 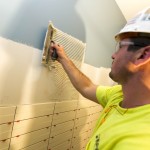 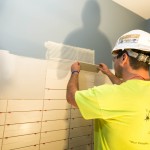 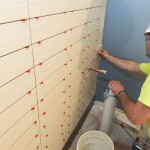 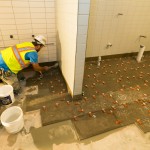 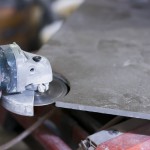 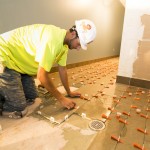 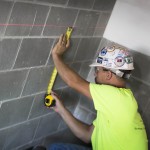 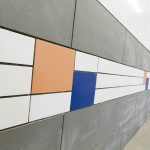 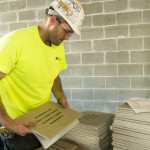 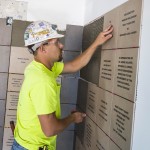 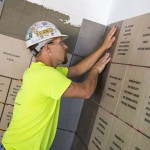 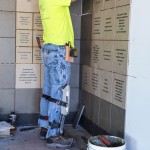 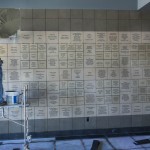 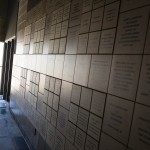 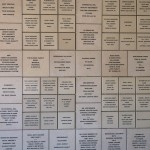 All photos by Andy Manis