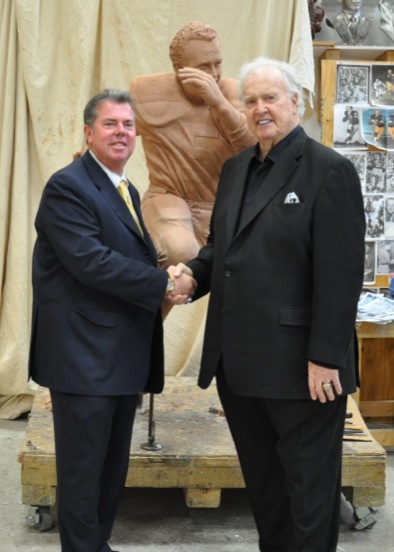 When the Packers Heritage Trail Foundation, Inc., looked for someone to sponsor a bronze sculpture of former Green Bay running back Paul Hornung it knew where to turn first. Edward Martin, president of H.J. Martin and Son, Inc., a national interior contractor based in Green Bay that specializes in residential and commercial work, not only is a close friend of Hornung; his connections with him go back to the 1960s when Hornung and the Packers dominated the NFL.

“I’ve been very close to that family all my life,” said Hornung.

That is no exaggeration. He knew Edward’s father, Patrick, when Hornung was at Notre Dame, where Hornung was a star athlete and from where Patrick graduated. He knew him better when Hornung went to Green Bay, with Hornung and teammate Max McGee frequent gin-rummy and dinner guests at the Martin home, and the two players occasional pitch-and-catch partners of Edward Martin, then in grade school.

“As a young boy,” Martin recalled, “they would come over all the time and play football with us in the backyard. That was sort of natural back then.” 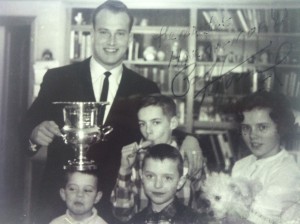 It’s not anymore. Nor is Martin’s relationship with Hornung, one that ran so deep that when Hornung — then 25 — was called to active duty in the U.S. Army in 1961, Coach Vince Lombardi petitioned his friend, President John Kennedy, to arrange a weekend pass so Hornung could play in that season’s championship game vs. the New York Giants.

“Paul Hornung isn’t going to win the war on Sunday,” Kennedy said, “but the football fans of this country deserve the two best teams on the field that day.”

“My dad was a World War II pilot,” said Martin, “and he had a Cessna 310 and a couple of other planes. And when (Hornung) got special permission to play, Coach Lombardi would get out of practice and bring the playbook over to our house. I would answer the door, and he’d say, ‘Give this to your Dad so Paul can read it on the way for the game.’

“But Paul was that good. He would show up for the game and not practice.”

Hornung showed up, all right. With Martin flying him into Green Bay from Ft. Riley, Kan., Hornung responded by scoring 19 points and getting named the game’s Most Outstanding Player as the Packers coasted to a 37-0 victory.

“One of the best games I ever had,” said Hornung. “That one was very special.”

So is Hornung’s relationship with the Martin family, with Edward behind the bronze sculpture that will be dedicated Saturday at the Packers Heritage Trail Plaza in Green Bay. Hornung’s statue is one of three to be unveiled by the foundation, and it’s one Martin was only too glad to sponsor — not only because of his relationship with Hornung, but because of what Hornung and his teammates meant to Green Bay and the NFL.

“Paul was one of the greatest football players Green Bay ever had,” said Martin. “All I know is that those guys paved the way for what the NFL is today. Without them there would be no NFL.” 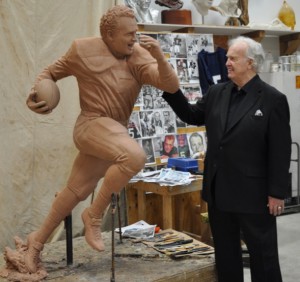 Without the Packers Heritage Trail Foundation, Inc., and without the Martin family there might not be a statue of Hornung — or any Packer for that matter — downtown.  That is no exaggeration, either. Hornung thinks so much of the family that he attended high-school football games involving Martin’s son and was there for his graduation. He’s also expected to be there for a high-school volleyball game this weekend involving Martin’s daughter.

Then, he and Martin plan to attend the Packers’ home opener together — just as they have for years.

“All my life,” said Hornung, “I’ve been very close to that family. I feel as if (this weekend’s dedication) is an award for them, too, because they’ve been such a tremendous force for Green Bay and because they dedicated their lives to the success of the Green Bay Packers. I’m thankful that I’ve known them.”