H.J. Martin honored as 2015 ‘Service Provider of the Year’

H.J. Martin honored as 2015 ‘Service Provider of the Year’

Company recognized by The Daily Reporter at Oct. 22 Newsmakers event

H.J. Martin and Son has been named as a 2015 winner in the Newsmakers of the Year awards of The Daily Reporter, a publication devoted to coverage of the building industry in Wisconsin each weekday. H.J. Martin specifically was honored as the ‘Service Provider of the Year.’ Every year The Daily Reporter recognizes “the outstanding achievements of local companies and individuals, and how their actions have made an impact on the building community.”

“It is a tremendous honor that The Daily Reporter looked at the thousands of construction firms in Wisconsin and determined that H.J. Martin was worthy of this award,” says Edward Martin, CEO. “Service has been a pillar of our company for over 80 years, so it seems appropriate that we would be recognized in that area.

“We can’t thank our many talented employees enough for their significant role in this achievement. Without them, it would not be possible.” 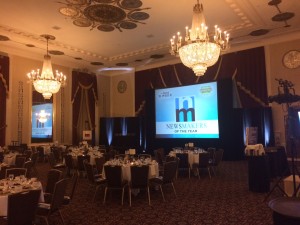 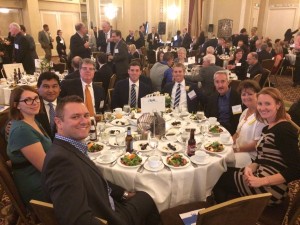 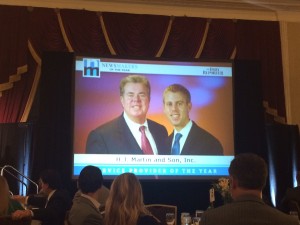 Edward [L] and David Martin were honored on stage 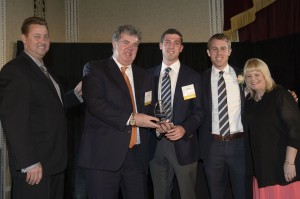 Among the 2015 H.J. Martin projects noted by The Daily Reporter were the 50-plus educational facilities completed by the company this year, the service provided to its many national retailer clients and the cross-divisional services at automobile dealers across Wisconsin.

Also recognized by the publication was the work of H.J. Martin in prominent hospitality projects, including new fan and player amenities at the Green Bay Packers’ Lambeau Field. Among these were construction services to the new 1919 Kitchen & Tap restaurant, the new Packers Hall of Fame and a new hydrotherapy pool for use by Packers players.

The company’s 2015 work in the hospitality sector also included the 12 Tribes Resort & Casino in Omak, Wash. and the renovation of the Edgewater Hotel in Madison, Wis., along with Backstage at the Meyer (Theatre) and renovation of the Hampton Inn property connected to the expanded KI Convention Center, both in Green Bay, Wis.

The continued growth of H.J. Martin in the areas of multi-family housing, senior-living projects and memory-care facilities across the Midwest also was noted. The company is believed to now be the largest service provider of flooring to apartment complexes in the state of Wisconsin.