For the fourth year in the past six, a flooring installer from H.J. Martin and Son has been recognized by Floor Covering Installer magazine’s annual Installation Awards. In 2019, for the first time in company history a pair of projects – one installation team and an individual installer – were honored by the publication.

In the Commercial Project-Resilient category, the Florence Middle/High School Addition and Remodel, was recognized. In the Residential Project-Ceramic Tile/Stone category, a Master Bathroom Shower within a new construction project, was honored.

“We appreciate that Floor Covering Installer readership once again has recognized the superior work of our installation teams,” says Edward Martin, president and CEO of H.J. Martin and Son. “The Florence school project was loaded with challenges, which our installers favorably overcame. The Master Bathroom Shower work completed by Josh Carlson reflects the level of craftsmanship we strive for in all of our work.”

Voters in Florence, a rural Wisconsin town of less than 1,000 residents located in the far northeast corner of the state just south of the border with the Upper Peninsula of Michigan, passed a two-question, $14.5-million referendum in November 2016. The proposals called for $13.2 million to construct a major building addition and other improvements, along with $1.3 million to renovate existing classroom areas. 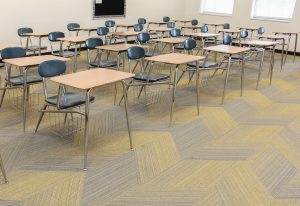 The Florence installation involved the careful placement of pattern and facet shapes.

A central aspect of the Florence Middle/High School Addition and Remodel project was the age of the buildings involved. It included the demolition of a 1950s-vintage academic wing and restoration of a historically significant 1930s-vintage masonry section of the school.

There also were two additions totaling 11,500 square feet: A two-story academic addition featuring four middle-school classrooms and two restrooms (9,300 SF), and a new kitchen (2,200 SF) to replace the original kitchen which was located in the demolition zone.

The H.J. Martin and Son commercial installation team of Randy Baril, Adam Meeuwsen, Mitchell Barta, Andy Vandenbush, Karl Freeman, Danny Culver, John Lancor and Michael Robenhorst successfully met two major challenges in completing work on the Florence school project. The first was related to the age of the renovated structure, nearly 90 years old. Floor preparation was a major issue and required extensive floor leveling to get them where they needed to be in order to accept new flooring.

The next challenge related to the project being done in phases. The installers needed to ensure that everything lined up properly upon completion between the old and new sections of the project, in addition to the varying phases of work.

A unique aspect of this installation was the pattern and facet shapes in the distinctive luxury vinyl tile (LVT) that carry throughout a major portion of the facility.

Common areas outside of stairwells primarily utilized an LVT gray in color, with yellow and green accents, reflecting school colors. Flooring installers needed to ensure that the LVT fit together properly for a precise look.

A proper LVT fit also was paramount in the building’s corridors. Lines needed to be kept straight – any variance would be very noticeable to occupants. Similar precautions needed to be taken with the patterned LVT installed in classrooms.

Challenges abounded on the Master Bathroom Shower project, which expertly was completed by H.J. Martin and Son’s Josh Carlson over a three-week period.

The entire shower is paper face-mounted glass mosaic tile. Installation is done with the paper facing out. The installer wets the paper and it comes off, but the paper keeps the tiles together for the install.

A related challenge is that the product is cut with a wet saw, and when you cut it the paper starts to come off. This characteristic meant that Carlson only had minutes to get the product cut and installed or the sheet would fall apart due to the paper being wet. If the paper were to come off too early, the product would not hold together.

Because this was a complete mosaic install, as part of the prep Carlson also needed to make sure the walls were completely solid and flat. 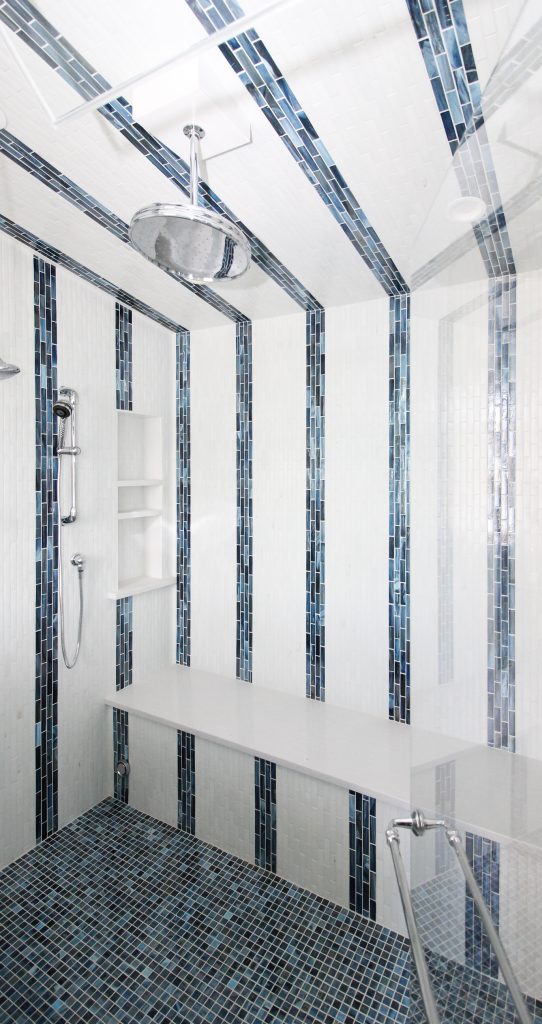 The Master Bathroom Steam Shower required that all the striping had to be lined up from floor to ceiling.

Overall the prep took longer than with a normal install because all the floors and the lower portion of the walls are heated.

All the striping had to be lined up from floor to ceiling. Carlson had to start from the center of the blue stripe or white stripe to ensure that the finished tile installation was aesthetically pleasing.

Additionally, each stripe is small in size, meaning that if Carlson was off even a little bit it appears to be significant at the end.

Carlson also did all the polishing of the white Thassos tile and fabricating of the bullnose. The polished edges are evidenced on the shower shelves and on the ledge located on the outside of the shower.

This steam shower with a pitched ceiling was custom designed for the homeowners, who love color and unique design, making for an enjoyable experience for the designer.

Because it is a steam shower, there are certain products which could not be used, limiting product selection to a degree. It also had to be built in certain ways to ensure that it functions and drains properly.

For instance, the ceiling had to be sloped. This requirement inspired the designer to come up with the idea for the vertical stripes. She said that this pattern reminded her of an old-fashioned circus tent, which provided a fun and whimsical design.

Similarly, there also were specific tiles and grout which had to be used. Again, this limited product options, making it slightly more difficult to create a fun, yet beautiful, design.

Unique features of the shower included solid-surface shelving and a heated, anti-fog mirror.

Additional aspects of the installation were the glass shower doors and a transom window to release steam pressure.

Previous winners of the Floor Covering Installer Installation Awards from H.J. Martin and Son are installers Rob Pomeroy, in 2017 for his work at Camera Corner Connecting Point in Green Bay, Wis.; John Lancor, in 2016 for his work on the Fox Valley Hematology and Oncology Center in Appleton, Wis., and Nick Mooren, in 2014 for his work at the Madison (Wis.) Central Public Library.