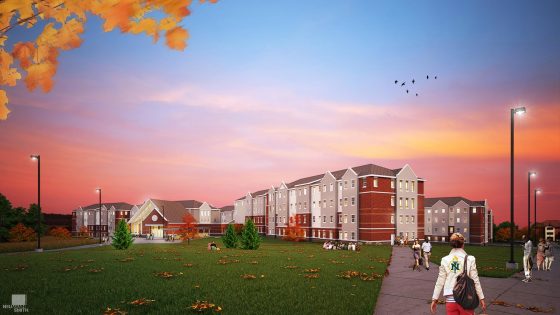 The Woods is a brand-new, $80-million residence hall community at Northern Michigan University, constructed in three phases. Its six, four-story buildings ultimately will house more than 1,200 students, replacing four existing dormitories which were 50-plus years old and demolished.

Phase 1, consisting of Buildings A and C, was completed in August 2017, just in time for 400 students to move in for the 2017-18 academic year. Two additional buildings, housing an additional 400 students, will be ready for use in January 2018, with the project scheduled for full completion in August 2018 with the opening of the final two buildings.

Along with housing students, The Woods features a large, 24/7 multi-purpose room known as The Lodge, which has an outdoor patio, fireplace and study spaces. Additionally, some classrooms, office space and a central marketplace are part of the living-learning community.

Interface® carpet tile was used throughout the student rooms, corridors and gathering areas.  Installed in 9”x36” pieces, it went into 184 total dorm rooms in the Phase 1 buildings. With a farmhouse-style, rustic look, 4-5 different colors were installed on each floor, intermixed.

Every student room includes a kitchenette, in which Luxury Vinyl Plank (LVP) was installed.

Additionally, bathrooms within the student living space required installation of both ceramic tile and ceramic base. Stair treads – 118 per building – also were part of this install.

Due to time constraints, H.J. Martin and Son was challenged to complete the initial two student buildings in time for the 2017-18 academic year. To meet the established hard deadline, 6-8 installers were utilized throughout. Crew size was upped to 15 for the final two weeks, working 12-hour days, seven days a week. 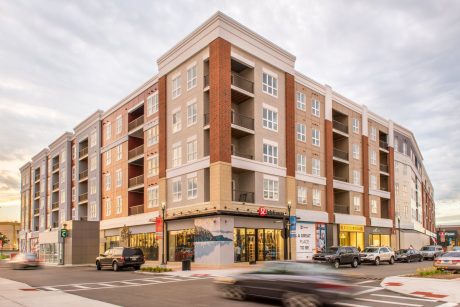 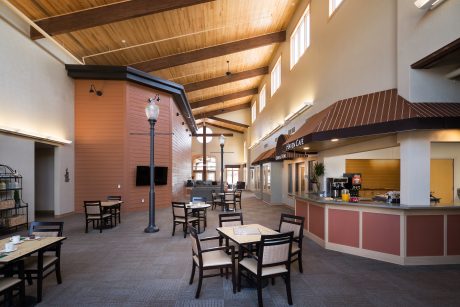