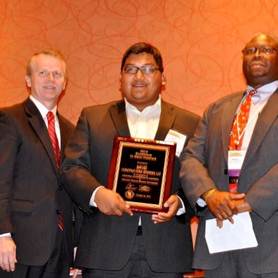 GREEN BAY, Wis. – The Wisconsin Economic Development Corporation has recognized Mavid Construction Services LLC as one of the state’s top minority business enterprise (MBE) contractors by awarding the firm the “2012 Excellence in State Contract” award at the 2012 Governor’s Conference on Minority Business Development in October.

“This award is based on our performance on state contracts as well as the volume of work we’ve done for the State of Wisconsin,” says Mavid co-founder Zoar Fulwilder. “We are very pleased to accept this honor from the Wisconsin Economic Development Corporation.”

Mavid Construction, a Native American-owned construction firm based in Green Bay, specializes in metal stud and drywall, commercial flooring, glass and glazing, and commercial doors and hardware. The firm has participated in a number of projects around the state, including work on five University of Wisconsin campuses and a number of Wisconsin correctional institutions. Mavid Construction also is involved in the current Lambeau Field expansion project.

“We’ve completed every job this past year with a 100-percent satisfaction rate,” notes Fulwilder, who co-founded the firm in 2008 initially to service Native-American casinos and institutional facilities. The Casino Arizona in Scottsdale, Ariz., was one of the firm’s first projects.

“Our focus is on providing the highest quality of work possible to all of our clients, and this award reinforces that we continuously are meeting that goal,” says Fulwilder.

In addition to this award, Mavid Construction also is a past recipient of the Indian Business of the Year award, given by the National Center for American Indian Enterprise Development.

Mavid Construction Services LLC, a State of Wisconsin MBE certified contractor, specializes in metal stud and drywall, commercial flooring, glass and glazing, and commercial doors and hardware. Based out of Green Bay, Wis., Mavid Construction also maintains a satellite office in Scottsdale, Ariz. The union-affiliated company can be reached on the web at www.mavidconstruction.com. H.J. Martin & Son, Inc., is acting as an industry mentor to the firm.