Festival Foods is an experiential grocer with 25 locations throughout Wisconsin. With explosive growth over the past decade, the company had nearly doubled its corporate office staff since opening its original headquarters in De Pere, Wis.

An entirely new 43,000-square-foot, two-story building was constructed adjacent to the existing facility. The new Festival Foods Corporate Office featured workstations, private offices, conference rooms and other collaborative “huddle” spaces, break areas and a training room, along with test and prep kitchens, all in an open environment.

A key element of the facility’s design was the incorporation of daylight, meaning that its flooring products in certain areas would need to withstand a high level of sun exposure. A half-dozen styles of Mannington carpet tile were utilized throughout the office space and training room. Mannington’s Amtico Wood luxury vinyl tile was chosen for the kitchen and break room areas for its rich look, mixed with superior performance. The data room saw the installation of Armstrong Static Dissipative Tile for its ability to prevent damage from static electricity charges. Daltile’s Mosaic Shores™ glass tiles were used in a random blend on restroom walls for the unique, radiant look they provided.

All of the work in the restrooms provided a challenge because of how intricate it was due to enclosed individual stalls. The project took place over six months in the first half of 2016, utilizing six tile installers and four carpet installers. 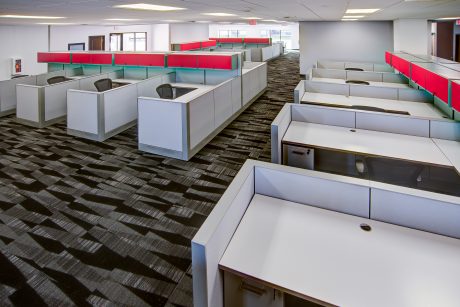 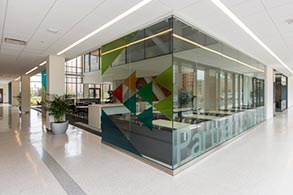